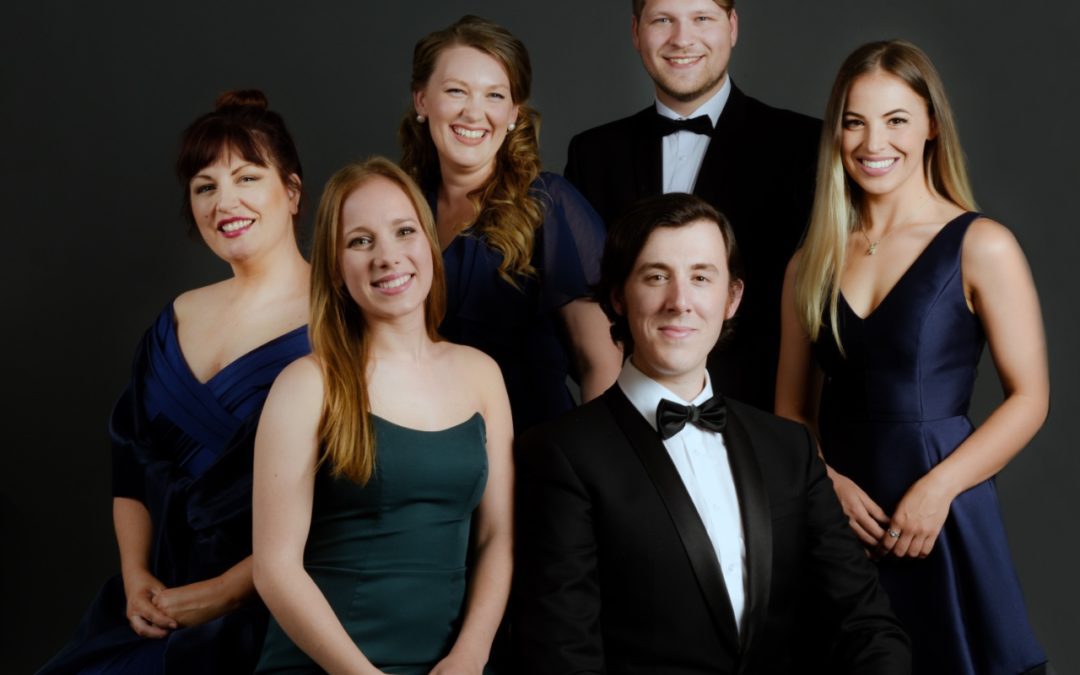 After the difficulties of 2020 the Richard Divall Emerging Artists Programme members are very happy to be back at work and continuing to develop their craft. Two distinguished singers, recent Herald Sun Aria award winner, Georgia Wilkinson and Eleanor Greenwood join continuing programme members: Louise Keast, Jane Magao, Michael Dimovski and Darcy Carroll. They have been busy with singing and language classes as well as coaching, concerts and productions. 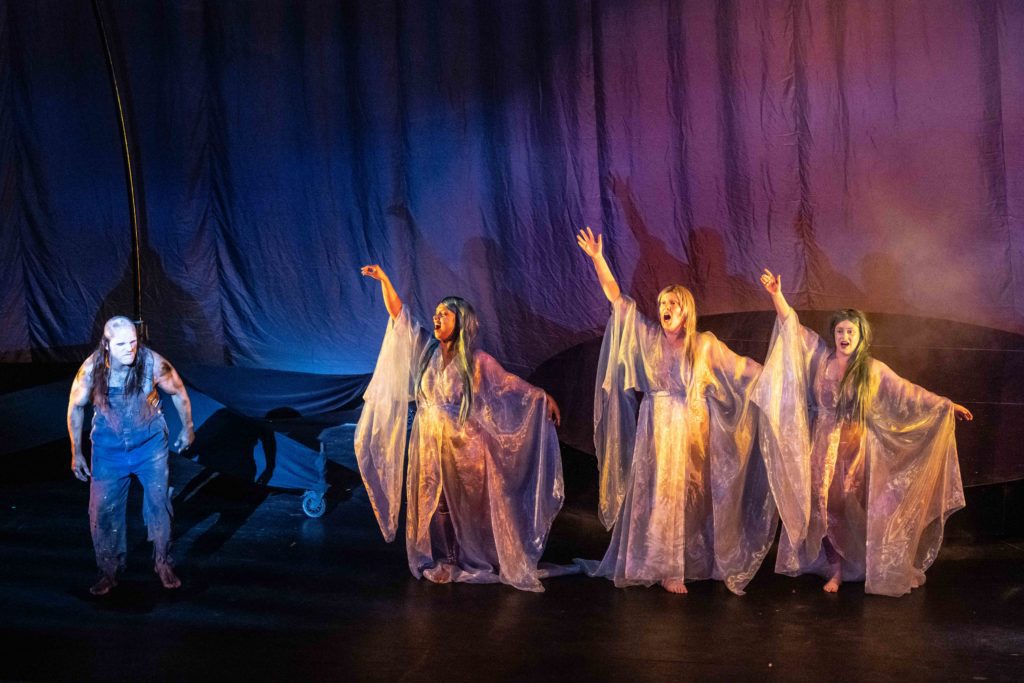 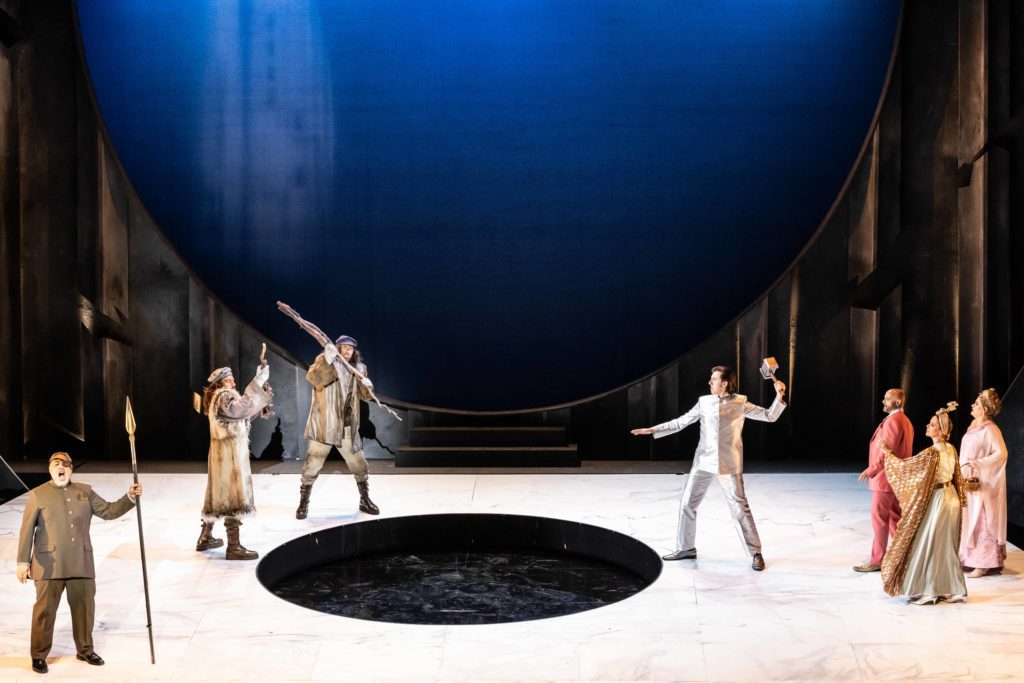 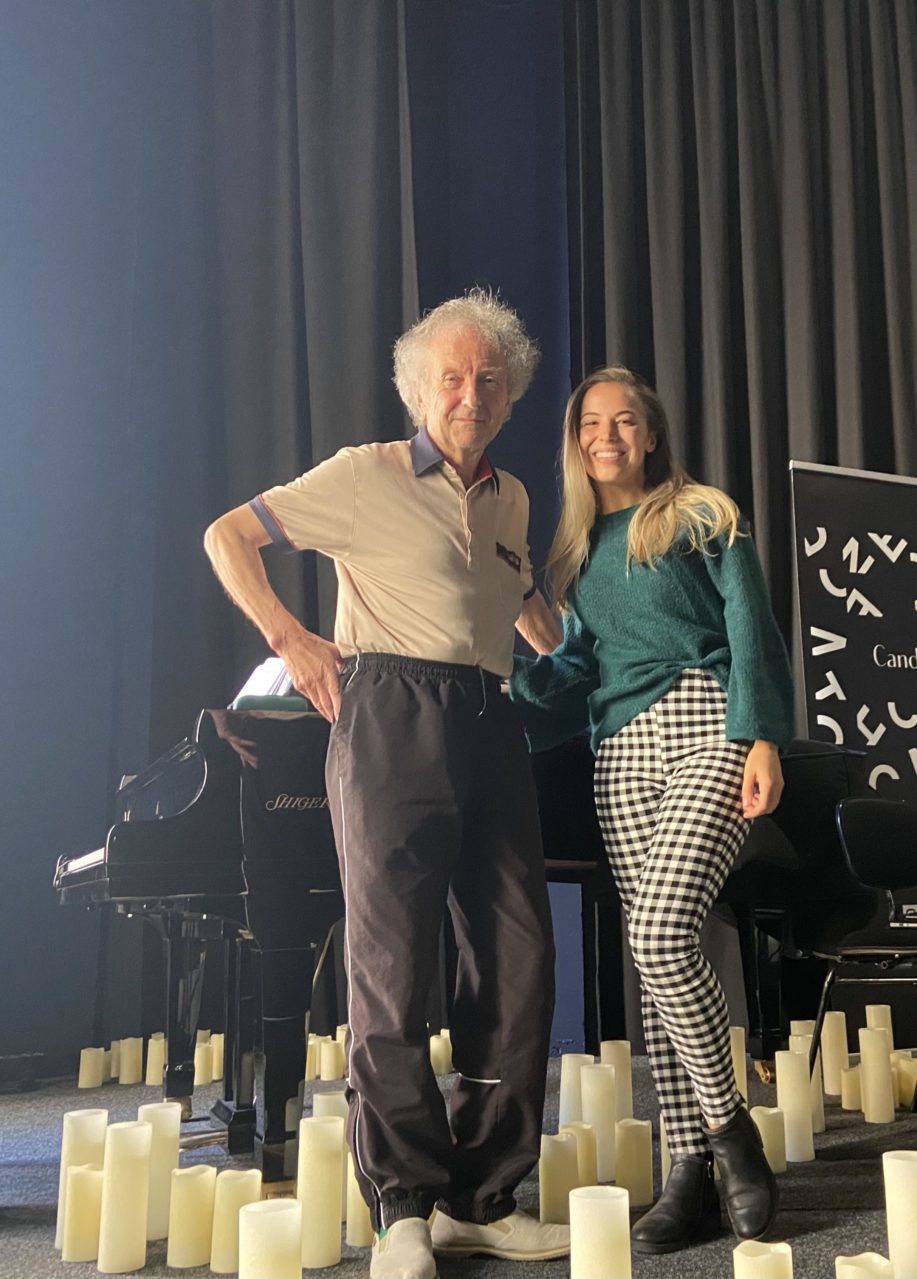 Maestro Anthony Negus once again was very generous with his coaching time for programme members. Anthony is pictured here with Georgia Wilkinson. 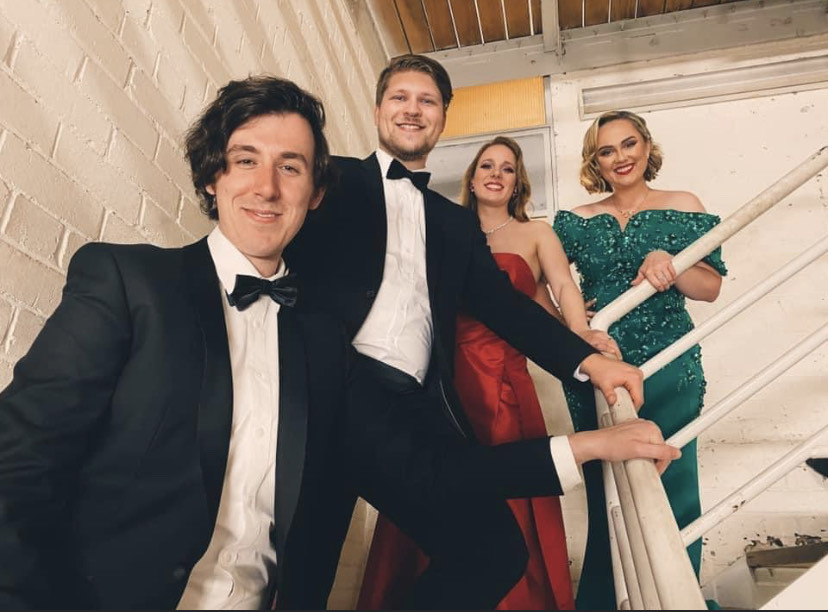 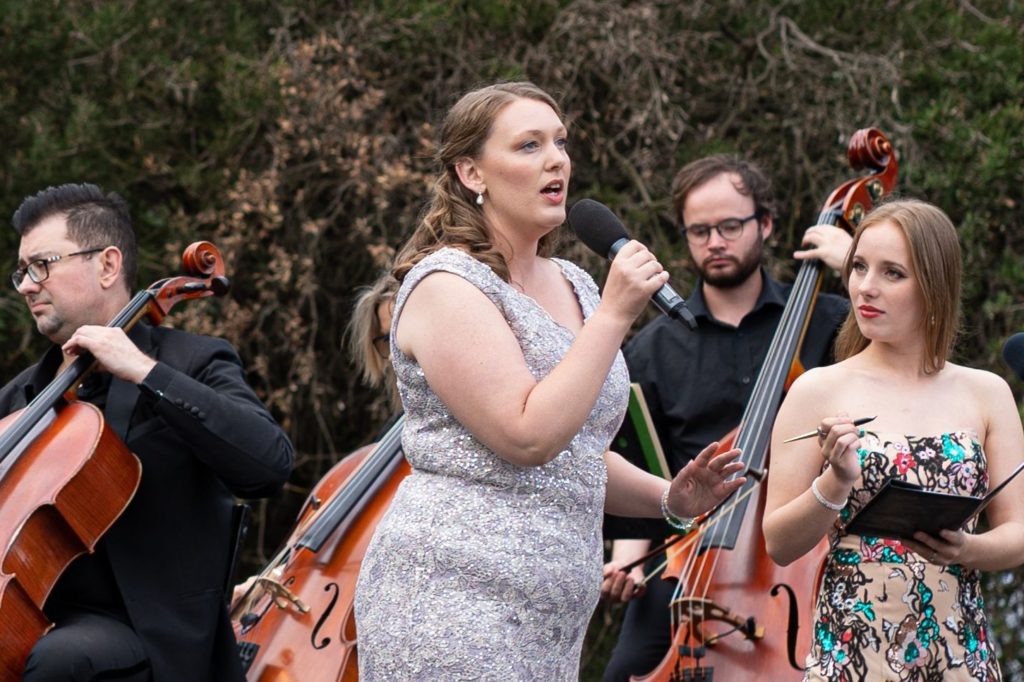 Louise Keast and Jane Magao with the Melbourne Opera Orchestra at Mozart by Moonlight (photo by Vivian Wheatley).

Our new friends at Rylands (Hawthorn) invited our programme to present an Opera Gala in their courtyard. It was an unforgettable performance with many tears shed and culminating in a La Scala type finish with red roses being thrown to the stage. Many thanks to past Wagner Society President Susan Cummings along with Ross Denning and Anne della Nogare for having the vision to present such an event. 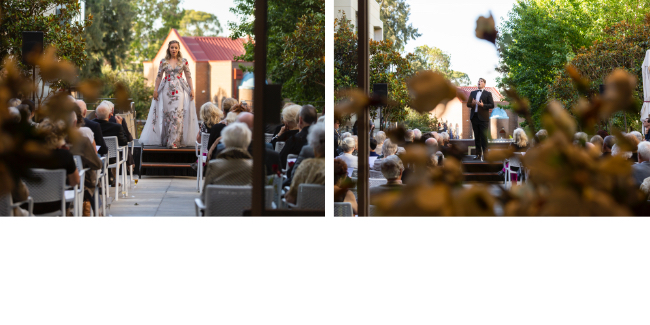 Our Associate Artists are doing many wonderful things including Shakira Dugan starring in the new Australian opera Cassandra at Playhouse (Arts Centre Melbourne), Louis Hurley played the role of Frances Flute in Benjamin Britten’s A Midsummer Night’s Dream for the Adelaide Festival. Stephen Marsh will be making a role debut as Zurga in The Pearlfishers at the Sidney Myer Music Bowl in April.

The programme during COVID lockdown

Language learning was a constant throughout COVID time with programme members choosing to focus on online learning of either Italian (Italian Institute of Culture) or German (Goethe Institute). We introduced highly popular weekly Zoom sessions of ‘Yoga for Vocalists’ and held weekly Zoom professional development sessions to keep the group together, motivated and well-prepared for post-lockdown singer professional life. Featured guests included Australian singers with international careers plus conversations about working with coaches, directors and even your accountant! Also competition and concert preparation and a whole new world of working to camera!

Contributors to these sessions included Roxane Hislop, Samuel Sakker (based in London), Fiona Jopson (based in Vienna),Alexandra Flood and Alexander York (based in Paris), Brenton Spiteri (studying at Guildhall in London), Gianna Rosica (accountant) and Greg Saunders (film acting coach). We are so grateful to all for their generous support of our programme.

Achievements despite the challenges 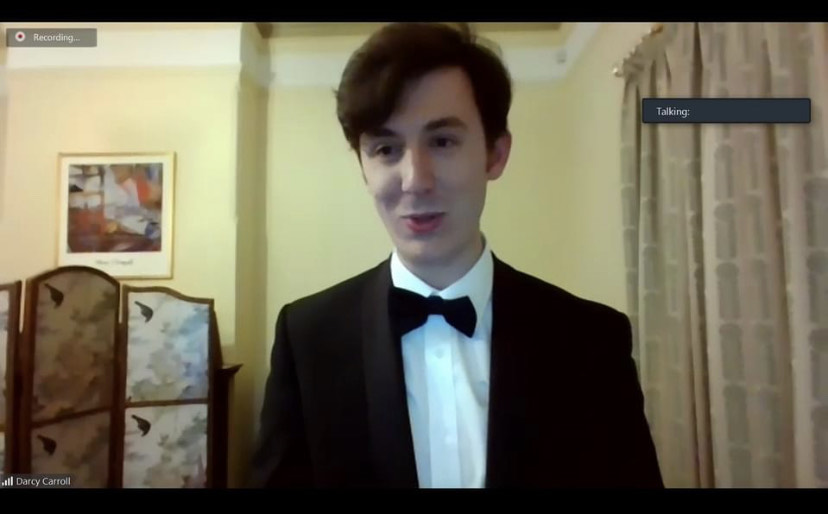 Darcy Carroll won the German-Australian Opera Grant (over Zoom!!) and is off to Wiesbaden to take up a one-year contract. Jane Magao was a semi-finalist in this competition. Louise Keast and Michael Dimovski are also off to Germany, both are winners of the Rotary NGSE award. Louise will be based in Stuttgart and Michael in Nuremberg and will participate in the Beyreuth Young Artists Festival. Of course, all travel plans are subject to travel advice regarding the international COVID-19 situation. Stephen Marsh was recipient of both a Joan Sutherland and Richard Bonynge Bel Canto Award and the inaugural Michael Stubbs and Malcolm Roberts Opera Prize. 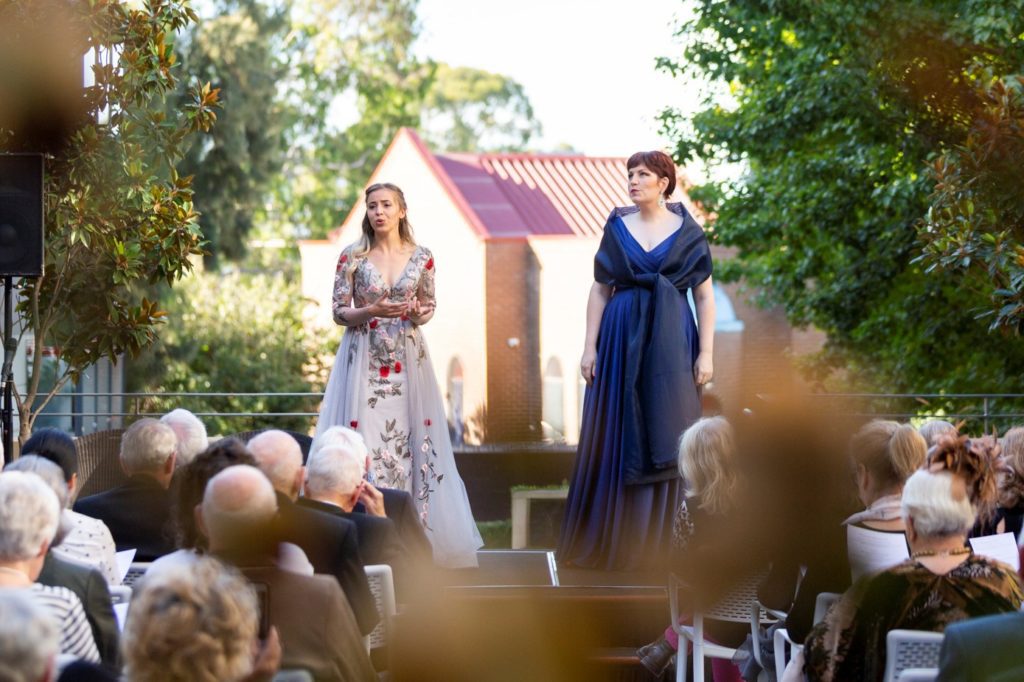 Louise Keast and Jane Magao sang in the ensemble for the new work Echo & Narcissus, recently performed at Arts Centre Melbourne as well as creating their own production of Cosi fan tutte with other developing singers planned for early May. Georgia Wilkinson, Louise Keast and Michael Dimovski will all be singing in the chorus for Opera Australia Autumn Season and emerging artists will feature strongly in Melbourne Opera’s upcoming production of Verdi’s Macbeth at Her Majesties Theatre in May.

Welcome to our newest programme members!

Winner of the 2019 Herald Sun Aria Competiton, Georgia Wilkinson completed a Bachelor of Music specialising in classical voice at Melbourne University, was awarded Opera Scholar of the Year and the Robert Salzer Voice Award. Georgia’s recent career highlights include being featured in Sydney’s Carols in the Domain, starring in Victorian Opera’s production of Alice Through the Opera Glass, Gertrude Opera’s 2019 Young Artist Program, Bravo Cruise of the Performing Arts, the Sydney Town Hall and concert performances of Jekyll and Hyde. In 2021 Georgia sang the title role in Sleeping Beauty and will play the role of Lisette in La Rondine for National Opera.

Eleanor has sung in the UK, Europe, Australia, and China. Eleanor made her start in Ireland at the Opera Festival in Wexford, in Statkowski’s unknown Polish Opera Maria. In Australia Eleanor has performed in Sydney, Melbourne, Brisbane, Adelaide and Canberra. Recent engagements include Messiah at Brisbane City Hall with the Queensland Choir, Mozart Requiem with St Andrew’s Cathedral Choir, Opera by the
Lake for Opera Queensland, and appearing as part of the Music on Sundays programme with the Queensland Symphony Orchestra, hosted by Guy Noble. Eleanor performed in Adelaide with the Italian Arts Society, hosted by Vincent Ciccarello. In Sydney and in Melbourne Eleanor sang with Australia’s national company, Opera Australia. In the UK Eleanor sang at Grange Park Opera and the Dorset Opera Festival, and she returned to Wexford Festival Opera in Ireland many times, singing as L’innocente in L’Arlesiana by Cilea and as La Ciesca in Puccini’s comedy Gianni Schicchi. She sang at the Ryedale Festival in North Yorkshire in Janáček’s The Cunning Little Vixen. Eleanor has performed numerous roles in opera productions as a part of the Bloomsbury Festival in London, and Goodenough College. Recently Eleanor has had a vocal fach change and has joined the Richard Divall Emerging Artists Programme to develop as a soprano.

The Richard Divall Emerging Artists Program was named to honour the memory of one of Australia’s most lauded conductors, Maestro Richard Divall AO OBE. It is supported by a generous bequest made by Melbourne born international soprano, Sylvia Fisher (1910-1996). Upon her death, Sylvia Fisher’s wish was to ensure the continuing support of the development of new artists of operatic excellence in her hometown. It is managed and coordinated by opera director Suzanne Chaundy, with Melbourne Opera’s Artistic Director Greg Hocking AM, Head of Music Raymond Lawrence and singers Margaret Haggart, Geoffrey Harris and Roger Howell.

The programme develops singers of great potential to a performance-ready standard, focussing on providing opportunities for emerging opera singers to experience the pressure of intensive role preparation, rehearsal and performance in a professional setting whilst continuing artistic development with tailored high-quality coaching, in-depth language training, drama workshops, master classes and mentoring. The programme collaborates with various Melbourne based institutions including 16th Street Actors Studio, the Goethe Institute and the Italian Institute of Culture.

We are so grateful for all the support we receive from the Ian Potter Foundation, Friends Of Melbourne Opera and the Sylvia Fisher Fund. If you are interested in finding out more about the programme, booking singers for an event, becoming a one-off donor or a major ongoing supporter of the programme please contact Melbourne Opera Company Manager – Robbie McPhee on (03) 9600 2488 or by email: info@melbourneopera.com.