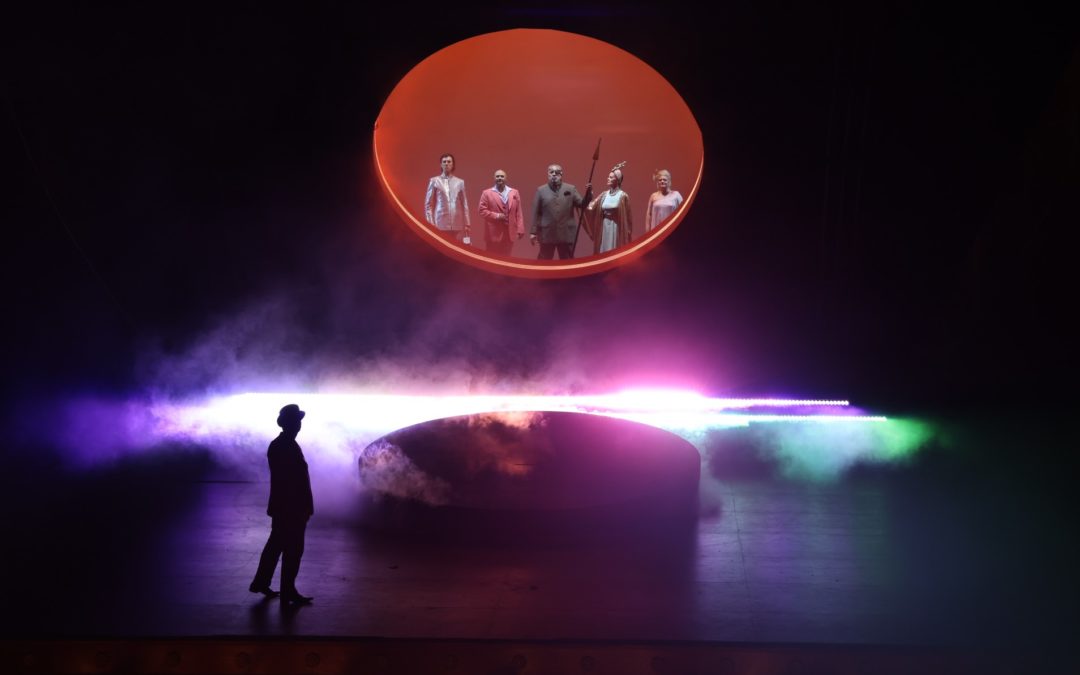 An almost year-long live-opera hiatus came to an end with a new production of Das Rheingold from the everenterprising MELBOURNE OPERA (February 3). There was certainly much to relish in this welcome emergence from the Covid chrysalis into Wagner’s world of giants and dwarves, serpents and toads, gods and apples; but of course, this is only the beginning of a new Ring, with the rest to come in successive seasons. The golden company already has a substantial Wagnerian track record, with productions of Der fliegende Holländer, Tannhäuser, Lohengrin and Tristan und Isolde. Still, the forging of a new Ring is a bold commitment that ushers Melbourne Opera into a new realm.

The Ring has also necessitated a shift of theatre, from the Athenaeum (the company’s traditional home) across the road to the more capacious REGENT THEATRE — an illustrious former picture palace whose splendid architecture frames the stage with a dignified opulence incorporating more gold than Alberich would ever be able to pocket. The company Wagner here before, but the Regent has since been structurally improved, an expanded dress circle bringing the audience closer to the action, with a distinct improvement in the once-socially-distanced acoustic.

Musically, the performance was swift, focused and straightforward in the expert hands of Anthony Negus, whose long affinity with Wagner (especially at Longborough and Glyndebourne, but also with MO) showed through in the clarity of phrasing and respectful balancing between pit and stage. (David Kram conducted two other performances.) The augmented Melbourne Opera Orchestra, overflowing Rhine-like into the sides of the front stalls, played heroically, although the percussion, positioned too high, was often overly obtrusive. There was appropriate raucousness from the 14 offstage anvil players.

Suzanne Chaundy’s production generally sticks to the story without too many unnecessary diversions or too much abstruse symbolism. In a programme note she describes it as ‘a poetic and suggestive performance space’, as indeed it proves. Andrew Bailey’s set, a handsome moveable platform with a circular cut-out at its centre, acts as a sort of drawbridge between upper reaches and lower depths. The polo-mint hole, though, is awkwardly placed for the singers, who have to work round it, so to speak. Rob Sowinski’s lighting, always adroit, reflects the music’s shifting moods with grace and subtlety. Harriet Oxley’s costumes are a mixture of traditionalcontemporary and gauzy-florid, with cute touches, such as a ram’s-horn headpiece for Fricka, a silver-foil suit for Donner, virulent red and black stripes for Loge, and shaggy yeti-style garb for the giants.

The singing on opening night was mostly fine, if occasionally a little tentative. Eddie Muliaumaseali’i, a distinguished, tall and authoritative presence, certainly looked the part as Wotan, but his soft-grained bass lacked steel. Simon Meadows’s Alberich was forthright and neatly essayed, but needed more of the essential insidious, squirming malevolence: the Curse was more of a threat than a portent. Michael Lapina’s excellent, pointed Mime avoided the usual hysteria in favour of clarity. Jason Wasley and Darcy Carroll were incisive as Froh and Donner respectively. Adrian Tamburini and Steven Gallop as Fasolt and Fafner were dramatically effective but with too much stick-banging (spear-banging, too, from Wotan) for my taste.

Sarah Sweeting and Lee Abrahmsen, whose voices were strong and true, easily filling the theatre, were first-rate as Fricka and Freia, while Roxane Hislop’s majestic Erda needed more vocal heft. There was a notable trio of Rhinemaidens from Rebecca Rashleigh, Louise Keast and Karen Van Spall—actually, make that a quintet, with the addition of two mute maidens, bending and weaving on circus sway-poles high above the depths of the Rhine.

This cycle should grow in structure and cogency; in confidence, too. But it is certainly off to an encouraging start. Melbourne last saw a complete Ring only a few years ago, from the national company, Opera Australia. There’s always demand for a new one. This Rheingold, Melbourne-instigated and sung entirely by artists from the state of Victoria, is something in which Melbourne Opera should take pride.